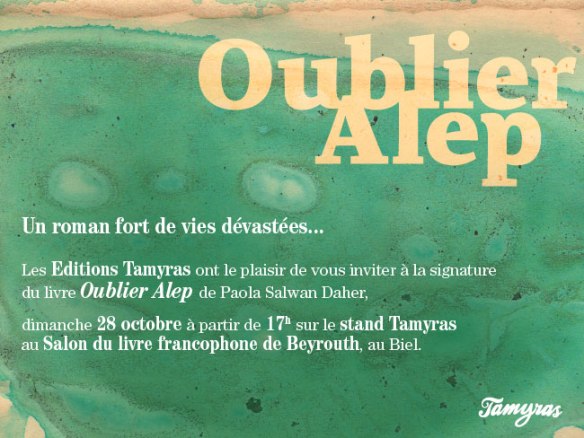 I’m coming to Beirut to present and sign my new novel at the Tamyras booth, Oublier Alep!

I’ll keep you posted on the time it takes place and on updates about the event! Hope to meet  you there! 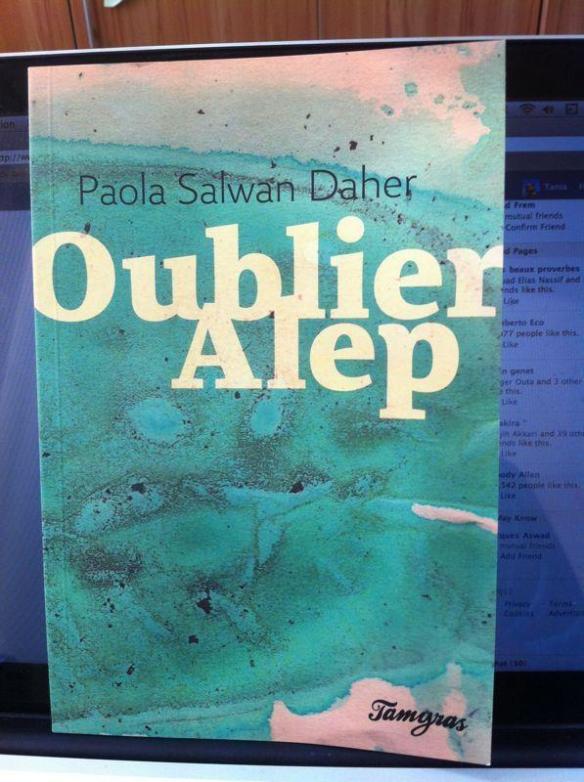 So much sun. So much freaking sun in this freaking city. No matter how hard you wished for it, the weather simply could not make itself match your Mood.
Jesus fucking Christ, as Gabrielle would say. Gabrielle was a lesbian. Not that there was anything wrong with that. She had just never been friends with one. Oh God. Sometimes she asked herself if she hadn’t made the biggest mistake of her life. Everything now seemed so unknown and blurry. Wouldn’t it have been better if she had gone through her wedding and complied with what was expected of her? Right now she would have been sipping a latte in her white and gold marble living room, in her upscale building overlooking Rawche.
Instead, she was following up on some order placed by Nina, in a cramped studio on a rickety chair.
Granted, she WAS sipping a latte.
I mean, you could take a girl out of her bourgeois comfort zone, but you could NOT take her out of her fondness for sweet coffee.

Shedding one life really was like shedding a skin: it left you raw and vulnerable.

Only for a short while, had said Nina. After that you become stronger.

She often wondered about Nina. How can one person be so fucking serene all the fucking time? Didn’t the woman get depressed over her single status? Didn’t she fear winding up alone, old and left out? She had asked her that very question during one difficult night, after her mother had barged into the workshop, barking imprecations of doom, death and destruction, in which the words “shame”, “inheritance” (or lack thereof) and “dishonor” came back quite regularly.
The past few weeks seemed to have been filled with these words, transmitted by aunts and cousins and of course her mother, until they had become like a regular tune, a distant stream of hurt, a cruel song she kept hearing at the back of her mind, without her even realizing it.

After a while, the words had stopped hurting her and she was only left with an overwhelming sense of shame and guilt. She had let everyone down. Her family, who had paid so much money on this wedding and who had done nothing except wanting her own good. Her ex-fiancé, who, despite being atrociously boring, arrogant and petty still did not deserved to be left in this way, and her friends, who could no understand why she had deserted their shared lifestyle. The worst part of it all was that her father had not called her.

It was bad, all round.
A thought kept nevertheless rearing its rebellious head. It was a thought that kept her awake at night, that kept her from running back to the life she had just left: my life is mine.
The fact that her parents loved her in their own way and had spent money on her did not give them the right to decide everything for her. They could no longer buy her. Her fiancé did not really love her, not like she wanted to be loved: he saw her as a prized possession, a woman with class and relations and money, a wife that would have made him look good. He would soon find another fiancé to play trophy wife with: she was well placed to know they abounded, she wasn’t the sole specimen of her breed. The fact that she sincerely regretted hurting people did not make her change her mind: to the core, she felt she had made the right decision.

It was just that she wasn’t used to 1) stand up for herself 2) have everyone being crossed with her and 3) not needing everyone’s approval every time she did something.

Her sheltered upbringing had shielded her from the evil in this world, but had failed to build up her strength. She was now taking an advanced, express class in Having Her Own Mind 101.
Failing the exam terrified her.

She looked around her: particles of dust were dancing in the rays of sun peering through the blinds. Muted noises came from the outside, signs that life, against its better judgment, still went on. She was as unimportant as dust: one day, this too shall pass. The Beiruti Princess felt crushed, drained, as if the hurtful words and judgment had washed her of her previously brilliant colors. She had found a small studio for an affordable rent, and reminded herself she was Nina’s PR/Communications/assistant now.

I am Nina Haddad’s aide now. She asks for my opinion. She respects it. I earn my own money.
I’m standing on my own, two, shaky, too thin, feet.
That felt odd, but nice odd, like when she let herself out of her flat every morning, that shiver, that thrill of independence she got every time the turned the key in her lock. Or when she had told the party planner to straighten her manners when she was talking to Nina’s petites mains. Had she been like that before? Belittling women that had she deemed uneducated, backwards, out of it. When she had met them, she had felt wronged, like these women did not fit the image she had forged of them. They were so much stronger than she could ever be. Some more friendlier than others, they all had good and bad days, they were all desperately human.

Independence was bitter sweet. She sighed.
Her phone rang, caller ID withheld. Absent-mindedly she picked it up.

The voice at the other end made her eyes fill with spontaneous tears.

I’m VERY VERY VERY happy to share with you the superb news that my second novel will be out at the end of this summer. It’s being published by Tamyras Editions, whose editorial line I love. I hope you’ll like the book!

The treasure is in the book.

I realised I have written many posts about what prompts me to write, without ever mentioning the primary trigger of my writings: reading.

For as long as I can remember, I have always been deemed bookish by the people in my family, my nose always buried deep into a book or another. Even when I had nothing to read at hand, I would pick up brochures, posters, papers, even labels on bottled water, pushing my eyes to their limit, wearing my first pair of glasses at 11, always looking for another story to lose myself in.

Because escaping from reality is – and has always been- the main reason behind my passion for reading. I love how a good story can snatch you out everyday life, drown your sorrows, make you laugh and cry and imagine new spaces and new lives: all you have to do is turn the page. I strongly believe life can just be too much sometimes, and each and everyone of us deserve a way out: some people turn to alcohol or drugs or sleep or partying or movies or whatever, I just turn to the magic of words and allow them to lead me wherever they’d like. Reading is my drug and I see every new publication as an added flavour to my dependance.

I love how multi-layered the pleasure of reading is: you first see the book, smell it, a strong inky smell when it’s new, a musty, dusty one when you’re just browsing into a pile of discarded ones in a flea market, start reading it. I choose books upon the first sentences I read: if I feel the silky threads of letters and words weave their web around me, I just buy it, knowing it’ll have a special place in my life.

Some books are speedily, almost greedily read the minute I have them in my hands; others I need to tame, to get accustomed to, to have on my bedside table for a while before daring to enter their worlds. Some were, and still are, passionate love affairs, books that I’ve always gone back to, reading them over and over again until their cover is nothing but a torn faded old picture of what it used to be. Some were bitter disappointment, often occasioned by the critics and media, assessing some boring pose as the new literary revolution, and I would run, gullible as I am, to open said books, only to find the author’s ego splashed across pages instead of the utter genius I was promised. Some I still need to figure out, some I’ve read cover to cover without even being sure I liked. Good books are like old friends: always there for you, I always feel so comfortable in their familiarity.

Books can be seen as dangerous, and are therefore banned, molested, amputated, censored, but they always manage to reappear, saved by the love of a fellow bookworm. Truth is, no one can ever stop knoweldge, creativity, resistance, imagination and love: and what are books, if not all of that, and more?

I am not going to bore you with my top 10 books of all time list (especially because as it happens I simply don’t have one) but I can share with you the books currently on my bedside table: